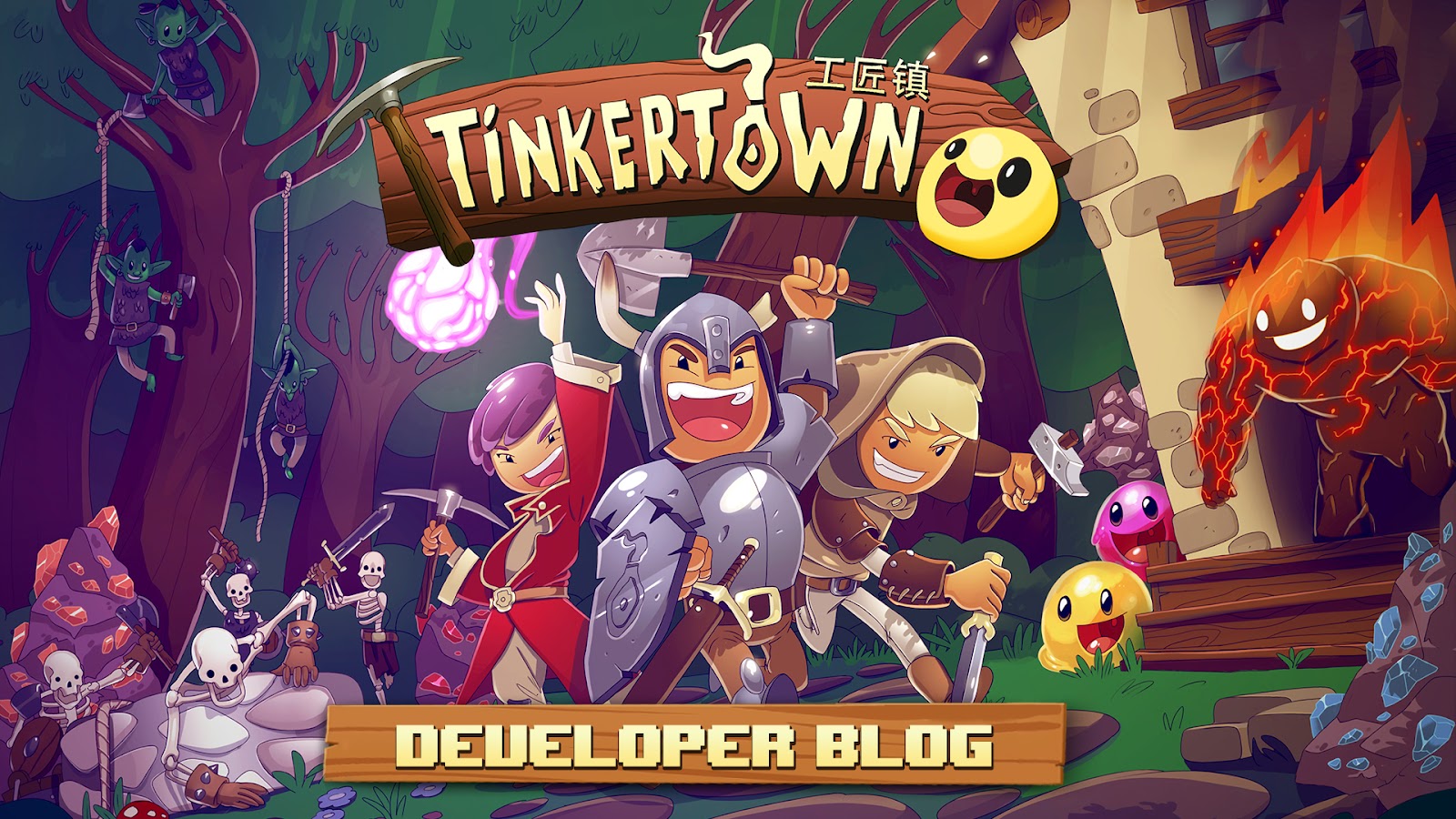 It’s been a while since we had the chance to talk to you about some of the recent and future changes to the game. With the upcoming “Combat & Classes” update on the horizon, we want to give you a deeper insight into our latest work and the reasons why certain decisions were made.

In this blog, we will go through the three new „classes“ / „playstyles“ and also show some of the new features like the charge attacks and the „buddy“ system that monsters now have. What about creating giant sand tornados with one of the new staff coming in the update.

What can you expect from the Combat & Classes update:
Tinkertown was always intended to allow you to change, experiment, and adapt on the fly to your heart’s desire. That’s why our definition of the term “Classes” might not align with the classic MMO or RPG consensus. You won’t make a decision to commit to a certain class and bind your character to it. There won’t be any classic skill tree or leveling system either.
We are truly sorry if that caused some misleading expectations among the community.
Tinkertown shall offer freedom to you and we want to preserve this element in future updates, too.

Based on this, you could also replace “Classes” with the term “Playstyles”. There will be three major lines of play for you to follow, defined by related armor and weapon options. While each of these major lines will focus on one of our new array of three – that’s right, three – attributes, there won’t be any restrictions or limits, when it comes to using or combining different kinds of weapons or armor to create your own set of equipment.

Let us give you a brief overview of these three basic “Classes” – or “Playstyles” – you’ll be able to experience:

Strength-based:
Focuses on Bonus Health and Defense alongside Strength, to protect itself in (mostly) close combat situations, while hitting slow, but hard against the targets nearby.

Dexterity-based:
Focuses on additional Movement Speed and Agility alongside Dexterity and is highly versatile in combat with several ranged and melee weapons. A Dexterity user prefers to land a flurry of smaller attacks in quick succession when it goes toe to toe with opponents, instead of focusing on one slow and mighty blow.

Magic-based:
Focuses on a large Mana Pool alongside Magic and uses powerful Magic Staffs to cast a variety of spells, preferably at range. Many of these spells can affect larger areas and plenty of foes at once.

But the introduction of the new attributes allows for some more changes! Alongside them, most weapons will receive scalings for one or more attributes. These scalings add bonuses to a weapon’s basic damage, determined by your attribute score and the rating for scaling. These ratings are ranked from E, which adds 20% (rounded down) of the related attribute as bonus damage, up to S, which adds 100% of the related attribute as bonus damage.
Additionally, weapons receive certain tags that flag them as e.g. light, heavy, one-, or two-handed, which will either in- or decrease the efficiency of agility bonuses on a weapon. As a rule of thumb: The bulkier and bigger a weapon, the less you profit from agility investment, especially with smaller amounts of agility.

You can build towards certain attributes by choosing the armor pieces you equip, based on the weapons you want to wield alongside them.

Charged Attacks:
With the new update, you will be able to charge weapon attacks. Please keep in mind that this applies to designated weapons only, excluding tools, like axe and pickaxe.
To charge an attack, hold the attack button. It will show a particle effect and heavily slow you down to let you know that you’re charging the next attack. The animation changes when you reach the maximum level of charging. Let go of the button to unleash the charged attack. A charged attack increases the attack’s damage up to a certain ceiling and might enhance the attack even further with additional effects or a changed shape and strike or projectile.
Some final important details on charged attacks:

Swings against multiple targets:
We read the feedback about the issues you experienced in combat. A prime example is that your attacks are caught by walls, although the displayed swing never touched it. To tackle these issues, we experimented a bit and implemented a new option for weapons to hit multiple targets. That means your swords e.g. hit everything in their reach now and some arrows can even pierce through multiple foes. Although possible, this feature won’t apply to axes, pickaxes, and other tools for the time being.

Knockback:
To make fights less static, we heavily increased the number of items that apply a knockback to targets, with some exceptions among the large monsters and bosses. Be careful though, since the same is true for enemies! Don’t walk too close to that cliff!

Dash:
The dash was initially meant to replace the jump in Tinkertown. But since jumping evolved into an emote to greet others and also became a precision tool for platforming puzzles, we’ve decided to enhance the Jump with what is currently the Dash:
By jumping and in midair pressing the jump button a second time, you “dash” quickly in the direction you jumped at, being able to cross more space until landing. During the jump and dash, you’ll stay invulnerable to a lot of attacks.
However, we are still experimenting with it and are looking forward to your feedback and experiences.

Enemy behavior and changes:
Aside from your toolkit as a player, monsters got some new tricks up their sleeves, too, with the new update. First of all their anticipation time is reduced, so you’ll have to react faster and choose more carefully when to attack and when to step back.

Additionally, certain enemies won’t be affected by certain buffs and debuffs anymore. A skeleton for example won’t bleed or be poisoned from attacks anymore. We heard a lot of feedback in regard to monsters being too fast on the overworld and chasing you for ages. To grant players more agency on encounter choice, we reduced the movement speed of overworld enemies and added another safety net into their AI which causes them to reset, if you are fully dedicated to retreat and don’t attack the monster.

Based on multiplayer feedback, we also decided to hit enemy scaling for groups of players with a quite big nerf. We’ll adjust this to its final form once the new mechanics are properly set and balanced for single-player and small groups. But the biggest change for enemies with this patch is the so-called “Buddy” feature. If an enemy sees you attacking a target they count as an ally, they will aggro and try to attack you, too.

General combat mechanics and fundamental changes to stat utilization:
A reason for the smaller amount of new content like items or enemies is the huge overhaul we performed on basics for stat utilization and the current weapons and armor items. This will serve as a solid foundation to build additional content faster for future updates.
Here is a short list of the new value of stats, including the new dexterity and magic attributes:

Some potions, dishes, and food items were reworked as well to match the expanded list of stats and offer options for all playstyles.

New Armor Sets And Weapons:
We know that the amount of weapons and armor with this update seems rather small, but reworking the systems behind everything was an essential requirement to build new sets and weapons faster in the future. With that said, please be patient with us on that part. New and epic stuff will drop as soon as possible.

How is the Travel update coming along:
Our main goal for the Travel update is to use constructions to travel faster between cities and outposts across different biomes.
The basic framework for this is set up already and we are currently exploring some more extravagant solutions than just a plain teleporter.

NPC & Housing:
(We disabled NPC passively gathering resources after completing the quests a while back, how is the work towards enabling it again)

To be honest, we did not look into it a lot yet. The gathering feature was originally built on top of the Quest system, but that system doesn’t seem to be very reliable. To tackle this, a larger rework of the gathering needs to be done to guarantee a smooth gameplay experience. In addition to that, we are very careful with our process on the quests, since we don’t want to risk corruption of the quest-related files for you guys.

How is the work towards better Multiplayer stability going:
The Classes & Combat update introduces an advanced way to approach projectile hits on the technical side of things. At this point, many things are handled by the server side. The server has a kind of “parallel world”, where events like an arrow impact, or a swing towards a tree get detected. The more things the server has to juggle, the more unstable networking gets. With this new update we want to achieve hit detection, based on the client-side, so the server does not need to know about any projectile collisions anymore and reduces the load on the server and host.
Network stability and server performance go hand in hand and these things are a continuous and evolving process. We constantly optimize the performance of the general game in various places and these things also improve multiplayer stability.

What are we working on right now?
We’re currently finishing the Classes & Combat update release version and building the base for the Travel update, while the design process for content on future roadmap milestones started already, too.

Community:
We will soon have an open Q&A where you can ask your questions about Tinkertown, so make sure to join our Discord and follow us on Twitter!

Thank you for all the support and feedback we are receiving from all of you!
The Tinkertown Team

The Server is ONLINE
0/10 playerslots used