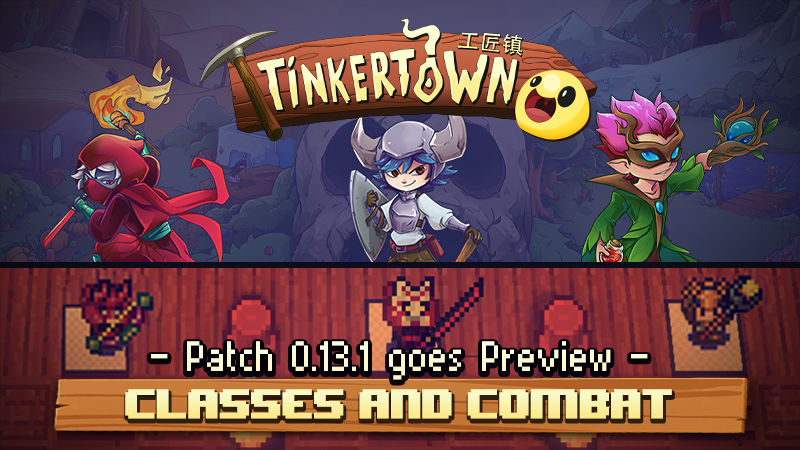 The new Combat and Classes Update is now available on the preview branch! You can now jump over and try out all the latest features and give us your feedback before it’s fully released next week!

Here is a list of all the new features and changes we have made:

Combat:
Knockback function (player or monsters will be knocked back on hit)
The anticipation frame is reduced (Monsters attacks will happen sooner!)
Buddy-list (Enemies close to the ones a player attacked will react and might attack the player as well)

Dash:
By jumping and in midair pressing the jump button a second time, you “dash” quickly in the direction you jumped at, being able to cross more space until landing. During the jump and dash, you’ll stay invulnerable to a lot of attacks.

Monster Behaviour:
New monster’s attack patterns for Goblins and Slimes; Introducing the „buddy system“ that will cause certain monsters to attack in a group.

Balancing:
Monster resistances and immunities (Certain Monsters might not be affected by some Conditions/Debuffs, or the effect is reduced)

Stats and Balancing:
Added Dexterity and Magic (stats are added to the player base from Armors)
Weapon-Scaling (determined by specific Stats, a Weapon deals more or less damage, depending on the amount of points a player has in them)

Gear:
Gear will use all Attributes, including the new Magic and Dexterity, to determine a player’s stats. Armor sets usually aim to prioritize certain stats to cater to a specific Weapon Category and a playstyle. Armor-parts can still be worn as a player wants to, giving the stats they provide without any bonus or penalty on their own.

If you want even more insight into the new update, you can read our Developer’s blog, which showcases the new features and break them down even further:
https://steamcommunity.com/games/1276660/announcements/detail/3316354736734413486

We always want your feedback, so head over to our Discord and let us know what you think about the new update and what you would like to add!

Thank you for your ongoing support! ❤️
The Tinkertown Team